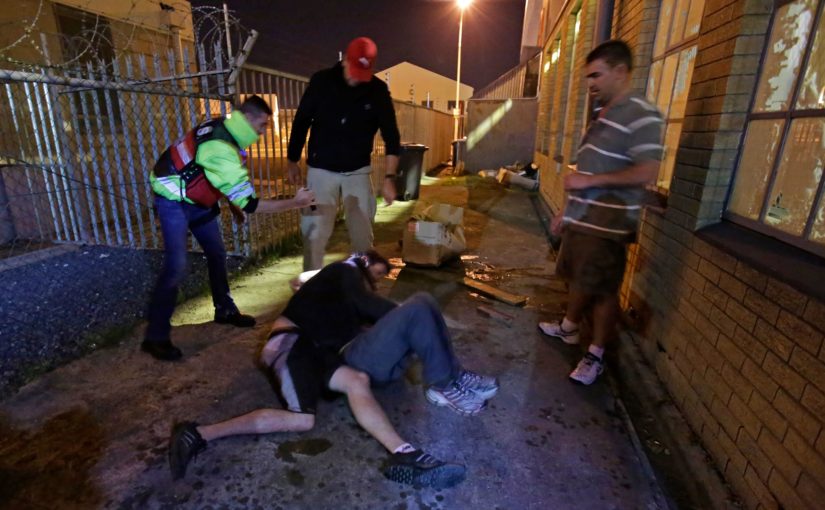 “So when do I actually hit him?”

This is a question I frequently get in training environments or events we host. The reason for this is that all of our training includes a situational, or scenario, component. We role play different types of situations more prevalent within our context. We then teach our “aggressors” how to escalate the situation they’re role playing realistically. This however always leads to someone wondering at which point they should now react. This sounds easier than it actually is. Due to the inherent dynamism in potentially violent encounters, or even in verbal confrontations and conflicts, it is difficult to have catch all answer to this problem. In retrospect we can say that then or there was the perfect time to react. Whilst there it’s not always so clear. Also, if we think about training, our role as provider is to help others to think right, we need to teach them to evaluate for themselves when they should react.

This article will help you to explore, and hopefully better equip you to train yourself and others on, some the dynamics involved in preparing yourself to respond effectively in developing situations. It is going to do so through helping you to understand the importance of being able to make decisions dynamically as a situation develops. It will also delve into some of the challenges this progressive decision making faces and give you some tips on how to train it.

In self defense specifically, as in boundary enforcement (Just Right Boundary Enforcement, Erik Kondo), there is what we would call a Just Right Response. Just right specifically in terms of the timing of the response as well as the amount of force used in the response.

In terms of timing it’s easy to understand that responding either too early or too late can have negative consequences. If I respond too early I lose my ability to legally justify the response because it essentially means that I responded before there was a valid Confirmed Threat Indicator (as opposed to only a Potential Threat Indicator). If I respond too late it means that I have just lost initiative. I’ve now been forced into a reactive pattern. There are quite a few negative consequences here. First of all, we are much less effective when we are responding as our decision making ability is greatly hampered by all of the incoming data. Second, losing initiative means that I now stand the chance of being injured first, which could lead to serious complications and even death.

In terms of the amount of force that we use there’s also a just right decision that needs to made. Using too little force could mean that my response is ineffectual. This has a couple of negative consequences of which I’ll highlight two. First, there’s a psychological factor involved for both parties. I know I responded ineffectual and this could hamper my confidence going forward. He knows it too and this could fuel his confidence. Secondly, when we think about the physical side of a confrontation, too little force could once again bring us back to being injured and all of the bad stuff included there. Using too much force we now get faced with both the emotional and legal fallout that will follow. From experience I always tell others, whether you hurt somebody for good, whether you hurt them for bad, whether you used just enough or too much force, at some stage it comes back to haunt you. You never want to be the guy that puts his head down at night and wonders whether you were justified in severely hurting or killing another human being. If you can’t answer that question with a good conscience you have some problems on the way.

So our goal is to find a Just Right Response. Under extremely dynamic situations. This is what Progressive Decision Making Ability is about. It’s about training the ability to make those decisions effectively under pressure.

Progressive decision making is the discipline and art of arranging signals and triggers to support us in making Just Right Responses.

We arrange Signals, Threats and Responses like this. The Signals are all the indicators that a person or persons (or situation) is a potential or a confirmed threat. A Trigger is the imaginary line in the sand. It is the moment at which I feel I now have to respond. The Response is the action that I take when triggered. A Response can be Too Much or Too Little, Too Soon or Too Late, as already discussed. The goal though is to be able to pick up on signals, select or have pre selected triggers in place, so that we can set up a Just Right Response.

Without spending too much time Boyd’s OODA loop model, one large take-away is the fact that decision precedes action. When we are able to make a specific decision about something we set ourselves up to take action more in line with our preferred outcome. Our Triggers are these decisions because essentially that’s what a line in the sand is. A visual or conceptual representation of a decision. Procrastination is not the lack of action – it’s the lack of deciding to act. In self defense, or in most types of confrontation or conflict, procrastination frequently leads to timing related consequences. For now it’s important to understand that I need to make decisions when in a hostile encounter. The decisions are mostly IF THEN clauses. IF person or persons A does this THEN I do that.

Progressive Decision Making is the ability to make those decisions as the incoming data develops.

For example. I’m sitting in a pub having a beer. A guy comes in through the door. His demeanor is subtly aggressive. I make a decision (trigger) that “if he gets really loud, demanding or confrontational with anyone (signals) I’m flagging him as a potential threat (response)”. He orders a beer and starts talking to another guy next to him at the bar. He systematically gets louder and more confrontational. I now flag him as a potential threat. Due to many factors however he’s not really a potential threat to me. However, I make the decision (trigger) that “if he comes over and starts talking with me (signal) I will flag him as a potential threat to me (response).” Low and behold, he catches my eye and over he comes. I converse with him congenially but I make a decision (trigger) that (for example) “if he gets argumentative (signal) I’ll excuse myself and leave (response).” Surely he does become argumentative and I congenially excuse myself and get ready to leave. I make two last decisions (triggers), one, “if he insults me I will continue to leave,” but two, “if he touches me I will hit him so hard that his head will smack the floor before his feet lift from it.”

This is a process that most of us go through without being aware that we are doing so. The challenge however is that if you are not experienced or trained in these matters you either miss the signals or you don’t set the triggers. Failure in either of these leads to inadequate responses.

Relativistic Nature of of Triggers

It is important to understand that there are some factors that should influence the selection of triggers. These factors are based on physical attributes, training and experience background, and situational development.

First of all remember, signals are what the other party is displaying, triggers are your own personal lines in the sand.

My wife has been struggling with one of her knees for a couple of years now. She struggles to run fast as she experiences a lot of pain. This means, that any response that is geared towards escaping or leaving an area fast, will be problematic for her. This isn’t necessarily a crisis – it just means that her trigger or her line in the sand needs to be a bit further away from the critical incident than, say, mine has to be.

For example, both of us are in a shopping centre, we pick up aggressive and demanding signals from a guy at one of the fast food outlets’ paypoints. There are some other signals as well. Aggressive guy is dressed anomalous, it’s warm weather but he has a jacket on. The cashier is glancing at his waist the whole time looking nervous. We cannot see if he’s holding something there and we cannot hear what’s happening. It could be a robbery or it could be an argument over a till slip he’s holding. The signals are the same for both of us. However, a trigger for me might be “if I see him pull a gun I’m out of here.” A trigger for her might be further from such a critical incident. It might be “if he starts yelling or someone screams I’m out of here.”

In this way your physical attributes like strength, athleticism, ease of communication, fitness and so forth might influence your own personal triggers.

Let’s imagine that we’re in a situation that, if it evolves into a full blown physical encounter, it will remain within the sphere of hand to hand combat. Ie. No chance of weapons. I’m standing at the bar ordering a drink. All of a sudden the guy next to me looks towards me and shouts “hey man, what’s your problem?” I did not do anything to him. I didn’t touch him, bump him, look at him, spill my drink on him, engage with anyone in his party in any way. So as far as I’m concerned the signals he’s giving off is that he’s looking for a fight.

I attempt to de-escalate the situation verbally. Whilst doing so I start to make my IF THEN decisions. I set my triggers. Here’s the problem though. Let’s imagine I’m 5’6” and he’s about 6’6”. If I have no relevant training I might decide “if he shifts his stance to face me I’m out of here.” If I have some training I might use the same trigger but respond “then I’m going to punch him.” If I’m really well trained and experienced my response can be “then I’m subtly going to match his footwork, set up the range so it works in my favor, get my hands into a good position, start to pick the best attack vector, and continue to try and de-escalate.”

Training and experience essentially allows us to come closer to the critical incident before we act. It also gives us more options in terms of how we can act. Training and experience, in legal expectations as well as in my own personal opinion, also leave us with the responsibility to attempt to have a more positive impact in a peaceful resolution to the situation.

This is the dynamic of how close or far we, as an individual, HAVE TO or EXPERIENCE WE HAVE TO set our triggers to the actual critical incident. It is easier and less complex to set up triggers and responses very far from the critical incident. Certain individuals though, either through choice, sense of responsibility, or employment expectations, are required to get really really close, even INTO, the critical incident. Think predators, law enforcement, military, security professional, certain bystanders, paramedic and so forth.

In all three of these subcategories it becomes clear that triggers are sometimes very subjective by nature.