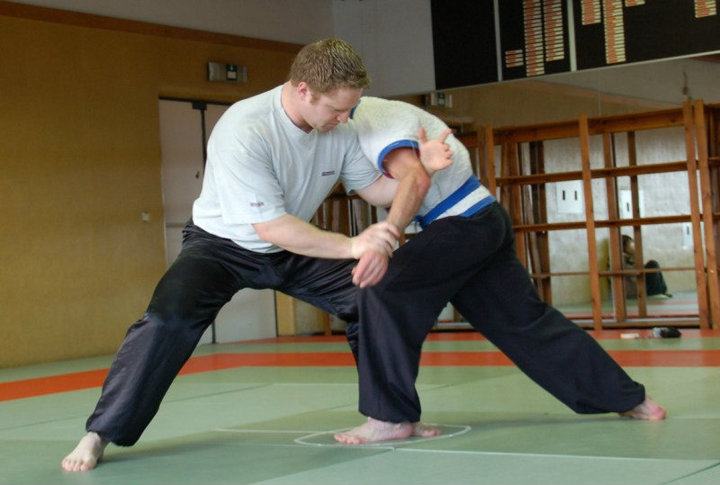 I am often contacted by clients who want to learn self-defense , but have no prior training or experience. They are total beginners, blanks slates. The question for me as an instructor is then: what is the best way to teach them? Throughout the years, I’ve developed my personal approach to answer that question and it has resulted in a basic self-defense system. It isn’t anything new, nor is it revolutionary, but it seems to work well enough, which is why I want to share a part of it with you here.
First some background.

There are many different aspects to self-defense training and there are probably just as many different ways to teach this subject. As a result, it can be difficult to get started on imparting students the skills they need to survive a violent encounter. One approach to do so is to look at common denominators: which aspects keep coming back in a majority of situations a student might encounter? Once you establish those, you have a place to start. Each individual person has his own specific context to take adapt your training to, but working from those common denominators allows you to cover a lot of ground quickly.

One of those common denominators is the timing of the attack in relation to the individual’s awareness of it. I work from three basic scenarios:

– Ambush. You only know you are under attack when the first blow lands. There is no advance warning or awareness of danger.

– He goes first. Your attacker throws the first punch, not you. You have some advance warning though, anything form a few seconds up to a few minutes if it takes the guy that long to work himself up to taking a swing. You are aware of the danger, but for whatever reason you don’t act first and he does.

– You go first. You spot the danger, try to de-escalate and escape, but this fails. You decide to use a pre-emptive strike.

Regardless of the context, these three scenarios seem to come up more often than not. Take some time watching Youtube videos of street violence in all its forms and you will recognize them easily.

Now that we know where to begin we have some choices to make: which techniques do you teach a beginner? I favor versatile techniques and constructive laziness: each technique must serve multiple functions so the student doesn’t need to learn many of them. This helps speed up both the ingraining process and the skill development. I teach a binary system that offers a hard and a soft response: techniques that disable (elbows, knee strikes, some other close-quarters techniques) and techniques that control (head and spine manipulations along with a basic elbow lock.)

The next step is deciding where to start. I choose to begin with the ambush situation because it is often what students fear the most.

When an aggressor lands his first attack, you are already behind the curve and things are unlikely to improve for you as time goes by. Your first goal is then to avoid taking additional damage and hold on to whatever capabilities you have left. To that end, I teach a modified flinch guard that covers both the head and vital organs. From there, the student learns to open up with a sweeping arm technique to help orient him on the attacker and then follow through aggressively with elbows and knee strikes. The counter-attack needs to be fast and brutal.

This rarely looks pretty, even in training, but that doesn’t matter. The goal is to fight through the pain and disorientation and turn the tables on the attacker before he can take you out. At that point, you have nothing to lose as you are already taking damage, so this becomes a full-on counter-assault.

Most students struggle with this at first, so I build up the intensity gradually depending on their tolerance to adrenal stress. Once they have some training, the difficulty levels go up and we incorporate drills and scenario training to mimic real-life situations. I have found that this helps give them the confidence to handle the next two scenarios.

In an encounter where an attacker uses a form of interview or other set-up, the student has some time to assess the situation. In a perfect world, he would de-escalate and leave but that doesn’t always work out. Neither is it always possible to get the first shot in, so it helps to have experience handling things when your attacker throws the first punch.

I teach students to cover up with the modified flinch guard or use the sweeping motion to block what comes at them. They learned both techniques already and have ingrained them thoroughly by that point, so it isn’t too difficult for them to use them in a slightly different context. Their feedback is often that it is easier to handle an incoming attack because they already went through the stress of surprise attacks and scenario training in which I ambush them. As a result, they are both less intimidated by that attack and defend better against it. Flowing into the counter-attack is old hat as well by then and they typically do so with enthusiasm.

Tactically speaking, it is often better to strike first when you know that violence is inevitable. However, simply knowing this doesn’t mean you can do it effectively. If you haven’t done it before, it can be mentally and emotionally challenging to “push the button” and launch that first strike, because this time, you are the one starting the dance. Remember that we are talking about students with no experience with violence; they often have reservations about using it.

My approach is to use the sweeping arm motion again and adapt it slightly to attack the eyes and other vulnerable targets with it. Once again, the student has already practiced this movement so much, it isn’t difficult for him to use it in this way. The same goes for the potential follow-up techniques.

This covers only a part of the technical aspects of what I teach them, but the other parts are beyond the scope of this article. My goal was to offer a framework you might find useful for your own training. As I wrote in the beginning, this isn’t the best method out there, nor is it cutting-edge stuff, but it works and is a good way to start the training. I’ve experimented with and fine-tuned this system for the last twenty years and found that the combination of versatile movement and the methodology of teaching the three basic scenarios in this specific order yields results quickly and ingrains lasting skills with beginner students. I hope you can apply some of this information in your own training.