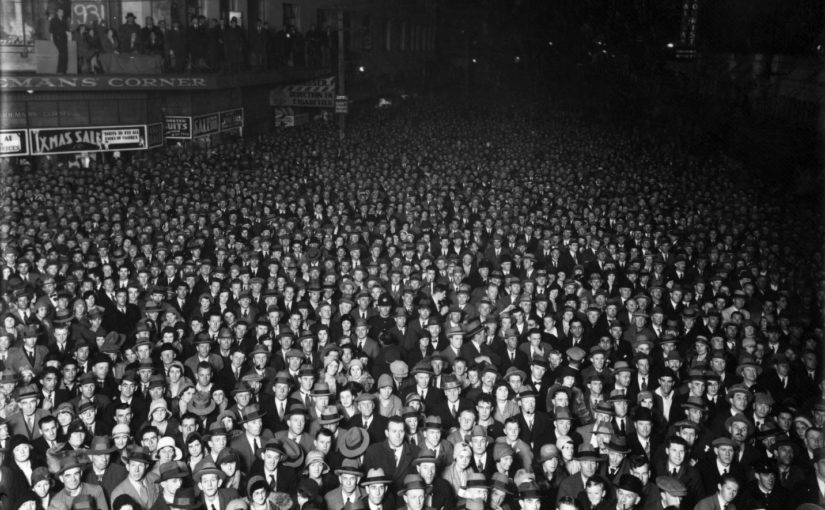 Something I am working on is explaining the human ‘wiring’ to be tribal and how modern society has pushed us out of our comfort zone when it comes to the ‘size’ of our tribe.

This is a simple concept with MASSIVE implications.
Starting with that we ‘owe’ obligations/sharing/support/concern to those INSIDE our tribe. The rules of how we treat those inside our tribe are very specific. We NEED the tribe for our survival. These reciprocal tribal obligations are what kept our species alive on a planet that was trying to kill us. Yes, this is a species level survival issue. Other species went extinct, we haven’t — because we are social primates. At the same time, when it comes to those outside our small tribe… well it ranges from not my problem to ‘fuck them’ to — and this is the source of my growing concern — “We’re going to get those evil rat bastards.” Changing tracks, I want you to understand something about an idea you take for granted. Nations are a VERY recent invention in terms of humanity. (250 years vs. 200,000 years.) Here’s another kick to the gut. The idea isn’t global yet either. But let’s look at what you were raised in in the West. We are told that as a nation we are a giant Uber-tribe. If you are a US citizen you have 324,000,000 fellow tribes people. You’ve been conditioned to accept this as ‘normal.’ Except there’s just one little glitch…

This is beyond most people’s functional ability — WAY beyond. Dunbar’s number postulates that we can only maintain between 100 to 250 stable relationships. That is our actual ‘tribe’ (or village if you will). With a little mental gymnastics most people can be comfortable with the idea of a Super-tribe (lots of people like them). We start gritting our teeth at the Uber-tribe. Where people really glitch is when someone tries to promote the idea that the ‘tribe’ is global. Ummmm I owe tribal obligations to 7 billion people? Totally over the sanity horizon, for anyone not espousing it, is saying animals, trees and Mother Earth are also your tribe — and you owe them the same obligations. Riiiiiiiiiiiigght.

Here’s the hitch. Uber-tribes are just too big. Going back to something I mentioned in passing we can sort of, kinda wrap our heads around Super-tribes. These are imaginary super groups that we both self-identify with and label others as. In the self-identity category, this reduces the ‘uber’ to a smaller, more intellectually manageable super-size. So now instead of 324,000,000 million your Super-tribe is a tens or hundreds of millions. The four main categories we use to separate ourselves from the Uber-tribe are politics, race, religion and socio-economic.
We’re more comfortable with drawing these lines between Super-tribes. But guess what? When we do that we fall into the “Us v.s. Them” mindset of tribalism. A mindset that historically had checks, balances, limits, consequences and most of all rules of behavior — especially when it came to getting along. Rules that if you broke, people you loved died.

This isn’t just internal rules that you followed. (Kosher and Halah food rules will keep your family from dying of food poisoning in the desert.) It’s very much keeping people you love from getting killed because of something you did to a member of another tribe. That’s tribal warfare out at the sharp end. And despite the bad rap it gets, way more time and effort is spent on trying to keep from having to try to slaughter each other than killing. This is people you know and love dying if you screwed that pooch.

Except now we’ve got a weird mix. A mix that can manifest in many different ways. One way is “Well I didn’t know the guy personally, but a member of my Super-tribe was killed by a member of a hated other Super-tribe, so that’s that.” Another version is “I want my Super-tribe controlling the Uber-tribe” (with no idea of what it takes to actually run things). Then there’s folks who seem hell bent on “We’re going to force you to do what we want.” This can — and often does — mix with “I’m relying on the rules of the Uber-tribe to keep me safe as I spit my hate at the other Super-tribes.”

This is a bit of a problem for a variety or reasons. One of which is you virtue signal inside your own tribe for status and conformity “Those rat bastards…” “Yeah!” Allowing for the “Jungle Book” aspect of dancing and chanting of ‘It’s so because we say it’s so!’ — this not a problem. This is acceptable behavior INSIDE your tribe’s territory. However the rules of different tribes are different. No big surprise, but what has been lost in the Uber and Super-tribe shuffle is the rules of how those of different — often hostile — tribes interact when they find themselves in proximity.
These are different still.

This loss is not a good thing. Starting with you don’t walk into a mixed environment and behave the same way you do among your own. This especially by calling out how stupid, wrong and evil that hated other group is. It doesn’t matter how much you believe it. It doesn’t matter how much you do it back home. You don’t do it outside your tribe because you’ve just insulted about six different people there who are from that Super-tribe. Oh yeah, and you ignored the effects of your word on the 12 others whose tribes are more closely aligned with the other than yours. (If you’re expecting those 12 to step in and save you, I have some bad news…)

Now as long as everyone has more invested in keeping the peace than responding, you can ‘get away with it.’ If by that you mean nobody throws your ass through a window (which in case you didn’t know, really slices you up.) The problem that I am seeing is that good will is waning. More than that, because people aren’t getting punched for bad behavior anymore, it’s escalating. People in certain Super-tribes are getting more emboldened about their words and behaviors, more self-righteous, more hostile. While those in other Super-tribes are getting pushed towards the point where ‘keeping the peace’ loses priority in light of the constant stream of insults, abuse and hostility.

Which again, ‘those rat bastards…’IS perfectly acceptable to say INSIDE your Super- tribe, but not in mixed company. You conduct yourself differently when you are dealing with folks from other tribes — or, and this is something people tend to forget, in neutral territory. That may be acceptable behavior where you’re from, but in this area you don’t know how many of the people you just pissed off are armed.

Another problem that I am seeing is that punching someone for lipping off has been banned. This low-level consequence used to teach people there were lines you didn’t cross unless you were willing to pay the price. Two relevant points. There are all kinds of levels of striking and reason for striking. I tell you this so you can understand the first point, a hit is the level you use for people inside your tribe whom you don’t want to hurt. The second point: Violence between different tribes often involves weapons. That’s because the intent IS to hurt. Stop and consider the implications of what I’m about to say.

Lower levels of physical violence can indeed escalate. However, they more commonly serve as a safety valve. A pressure relief that would go before the boiler blows up. That safety valve has been wired shut … and pressure is growing. Worse, it seems there are some folks out there intent on stoking the boiler. I’m going to leave you with this thought. You have a whole lot of people who are out there with no idea about the nature of intra and inter-tribal violence. Many of who are apparently pushing for conflict against other Super-tribes. Do they recognize what they are doing? Are they thinking that they are under the protection of the rules of the very Uber-tribe they are rejecting and holding themselves apart from? Are they thinking that the rules of their Super-tribe are the only rules that count? (Translated to: I have the right to do ____, but you don’t have the right to react except according to my standards.

Solid example: I can scream my hate at you, but you can’t strike me for my words.) Are they willfully abusing people? This by relying on other’s preference to keep the peace instead of reacting to their goading? Are they giving themselves more and more permission to act because they’ve moved into a Super-tribe echo chamber? An environment that not only encourages, but demands they loudly ‘virtue signal’ whatever ultra-orthodoxy is in fashion at the moment? Is this a fight they think they can start and then walk away from if it gets too intense?