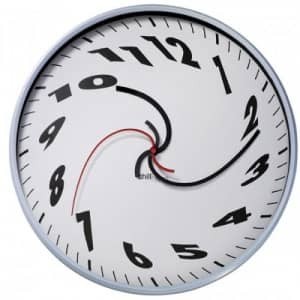 The ability to manipulate time is the ultimate super power. The benefits of time travel are obvious. So too is having the capability to slow time down and dodge bullets Matrix style. If you can control time, you will always be faster than your opponent. This advantage would virtually guarantee your victory in a physical contest. But let’s face it, you can’t control time. But you can optimize the manner in which you use time.

You can optimize the use of time through efficient brain processing which allows you to move and think as fast and smoothly as possible. Just like a computer with a faster microprocessor, you can get more done and quicker.

Your brain can be thought of as having two systems. System I is the fast processing part of brain that doesn’t think on a cognitive level. It processes movement, touch, and balance and is based, in part, around your Cerebellum. System II is the slow processing part of your brain that thinks, strategizes and is based around your Prefrontal Cortex. Most complex tasks such as human physical performance and competitions require both System I and System II utilization. The trick is to deconstruct these tasks so they are accomplished in the most efficient manner by your utilization of System I and System II.

As an analogy, imagine you have two friends Flash and Geeky. Flash moves very fast, but he can only do certain tasks and follow known patterns. Geeky on the other hand, moves slow, but his actions are creative and strategic. Your job is to locate a needle in a haystack. One method would be to divide the haystack in half and have Flash and Geeky sift through their respective piles. A more effective method would be to have Geeky devise a clever searching strategy that both he and Flash could implement.

When it comes to optimizing your overall task processing, your System II devises a plan of action that your System I is able to execute for certain aspects of the task.

Let’s examine juggling three balls as a complex task to be accomplished. If you pick up three balls and attempt to juggle without prior experience, you will fail. You will not know how to get started other than to throw the balls up in the air. No pattern will emerge. There is nothing instinctive about the standard three ball juggling pattern.

As an aside, you can learn to juggle two balls in one hand by doing nothing other than practicing. That is because it is intuitively obvious how to do it. You just need practice. Rock climbing is the same. Put someone in front of a rock face (not too hard) and he or she can just start climbing. She may be technically weak, but she can get started. The same goes for fighting. Emotions aside, anyone can physically fight without training. He or she may fight poorly, but he can do it.

In order to juggle, your System II must discover and learn the three ball juggling pattern. Once you intellectually understand the pattern, you still must implement it on a physical level. You will throw the balls up in the air as before, and they will still fall to the ground. It will appear to you that you have no time to throw, catch, throw, and repeat the pattern. You will feel rushed and overwhelmed. The problem is that your System II processing is too slow to be able to juggle three balls. And your System I has not had enough pattern training/repetitions/practice to take over primary processing control. Therefore, if you are like most people, you decide that juggling is too hard to learn and you quit.

But if you are determined to persist, you need a strategy for success. In the beginning, you need to slow down and reduce the inputs to your System II to a manageable level. You start with one ball. Your System II can handle one ball with ease. You have plenty of time to throw and catch back and forth. You add a second ball. Now it seems that you have less time to respond. The balls seem to move faster (they don’t). Two balls results as many throws and catches (inputs) as your System II can handle.

The more you practice, the more your System I will become involved in the processing. As System I builds proficiency and takes over processing from System II, you will feel as if you have more time. You throw and catch without thinking about the movements. They just happen. It seems as if the balls slow down. Eventually, you will notice that you have time to throw a third ball into the pattern. But once the 3rd ball is in play, you will feel rushed again.

At this point, your System I doesn’t know how to process the three ball pattern. Your System II must guide the pattern which slows down the overall processing. Hence, your feeling of having no time. The more you practice, the more System I processes and the less System II processes. With enough training and repetitions, you will be able to juggle three balls and feel as through you have plenty of time. When System I is primarily processing, System II is available to focus on other tasks such as observation of your surroundings, talking, planning future movements/tricks and so forth.

Now imagine that the processing doesn’t involve juggling. The task to be performed is hand-to-hand/stick/knife/gun fighting. The overall concept is the same. The more pattern movements processed by System I, the more time you feel is available for higher level System II cognitive tasks. Time seems to have slowed down for you (It hasn’t). But you have optimized your brain processing and resulting performance.

Your goal is to force him out of fast System I processing into slow System II processing. You can accomplish this goal in multiple ways. Here are a few:

The bottom line is that accomplishing complex tasks effectively requires prior brain training and maintaining optimal brain processing in real time. While you can’t manipulate the actual passing of time, you can still use time to your advantage.