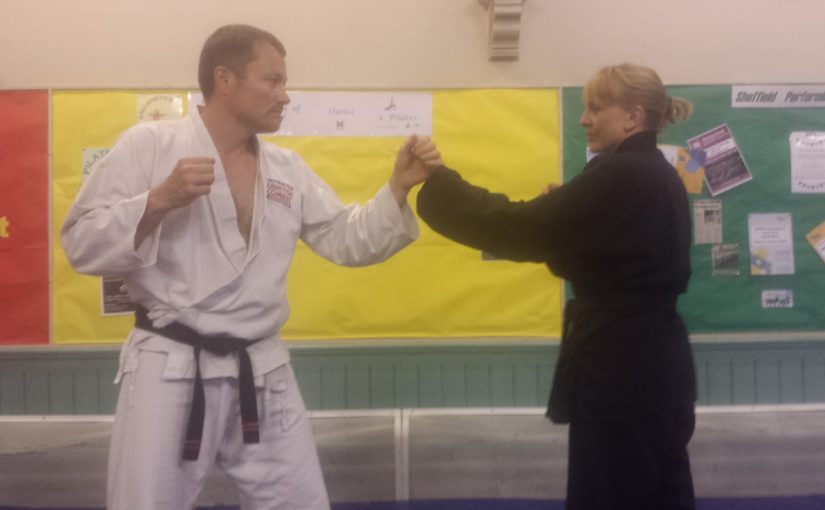 We were training in Ju Jitsu pretty much as normal one Saturday recently when one of our senior instructors and fellow director of CRGI Jayne called me across the mat. She was helping one of our 1st dan black belts Sam with one of his 2nd dan techniques, (Jayne is a 3rd dan for the record). She asked me to demonstrate the technique,

So after a few seconds thinking back I did, just like that, and that is where the fun started. Jayne then demonstrated on me how she did it, there were a couple of differences and we started discussing them. As we did our other senior instructor Bill came over and joined in, he is a 6th dan and has studied and trained Ju Jitsu longer than Jayne and I combined, his knowledge is encyclopedic.

Bill demonstrated the technique, it was different to either of ours, so now we have Sam watching 3 different versions of the same technique. The technique in question is irrelevant, the point is you have 3 senior instructors all showing how to do it differently. So off we go into a huddle to discuss how and why we do that technique the way we do.

To be fair there are a number of techniques where we teach a couple of variations and we are happy to differ. So once again we discuss, try each others way and agree that what works best for each of us is cool as the core technique works however we manipulate it to suit us. The differences are usually influenced by both psychological and physiological factors. Jayne is 5’2½” tall and slight and needs to make her techniques work mostly on a much bigger male opponent and she trains to hurt them a lot, Bill is about 5’10” and a skilled technician in the art and he trains to hurt them skillfully whilst I am 5’9” and a bit of a thug, I am not much concerned about the art I just want the job done.

After our discussion I went to explain to Sam our differences and why we have them and asked if it looked a bit amateurish. Sam is the clinical director of a hospice and we all have great respect for him, his reply was not what I expected, he explained how many skilled medical practitioners do just what we did but not in front of the public. He described how after some examinations of a patient they go off to a private space and share their different prognosises. He regarded what we did as a very positive thing.

The philosophy we all share is that the tecnique needs to fit the student not the student the tecnique. Both instructors and students come in a variety of shapes and sizes and one size does not fit all. I have seen really bad practise where a student is made to repeat again and again a technique in a particular way when it just does not work for them, a slight change of position of one leg might make it work but that is not allowed because it has to be done this way and this way only because it always has been. If it does not work for you then that is because you are the problem.

That stinks but the attitude that underpins it is seen as a virtue by many in the martial arts and self defence industries. It is at its worst in those systems that exhibit cult like practises and behaviour. Too many people slavishly follow the how it has always been done approach for my liking, I love my Ju Jitsu a lot, it is fun and works for me. Last week one of our black belts who has not trained JU Jitsu for years because he went off training and fighting Muay Thai came back for a session and took me down with a leg sweep they use. The good news is he will be training with us and instructing regularly in the new year and will teach us the said leg sweep plus some other cool stuff, also there was one of our black belts who does BYY and he often teaches us stuff not in our sylabus.

Its abou having an open mind and recognising there is not just one way to do things and that having conversations about it and if necessary agreeing to disagree is a very good thing indeed.