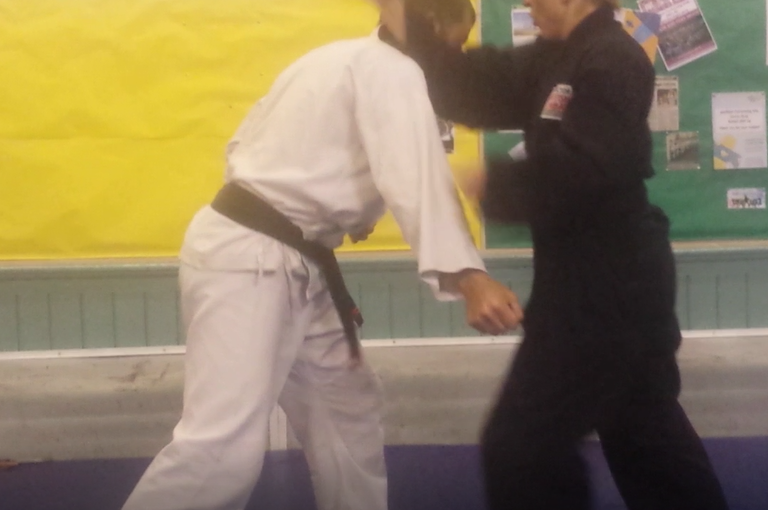 The subject of women and self defence has been a popular topic in recent months following a small number of incidents in the city where I live. In response the Academy of Self Defence, where I am a senior instructor, have provided free seminars followed by the offer of structured classes, after which I am always left asking myself the same question with increasing frustration.

What the hell is it that woman want from self defence training, do they even want to train?

My father was keen for his children to learn martial arts but it was actually his first grandson who eventually showed an interest. I didn’t feel the need until I reached my mid-thirties. That stemmed from an altercation whist driving with my then nine month old son asleep in the back of the car. Now whilst I was quick to hit the hijack locks it made me realise I needed something more to protect my valuable cargo on a daily basis no matter what, when or where.

My first attempt was to accompany a work colleague to a kick boxing class where the instructor simply allowed his teenage pupils to freely kick us in the head. Thankfully that knocked some sense in to me and I sought the wisdom of my father who directed me to the very same club he had taken my nephew to all those years ago. I was greeted by a shaven headed chap dressed head to toe in a bright red Gi (ringing any bells Garry?). The class was a good mix of male & female students (tick). There were separate male/female changing areas (tick). There was even another new starter, albeit a man, who is still one of my regular training partners today and my dogs vet! I won’t lie it was a daunting experience and I’ll let you into a secret, I did take my father with me like the typical daddy’s girl that I am.

Not everyone is as fortunate to find a legit dojo like me, filled with the fantastic people who after all these years I can honestly call my friends…you all know who you are. I am now a third dan black belt and senior instructor, my son is a junior black belt and junior instructor. The club I joined has transformed over the years for the better.

So you might be thinking I know what women want, but I don’t. I was lucky, determined (I bought a Gi on my second lesson) and that way minded…I have two older brothers who I used to play fight with which explains a lot in my book. Garry and I receive numerous queries from women who want self defence training. We take part in radio shows, provide free seminars in response to actual attacks on local women and organise mini courses to suit.

These efforts generate a lot of interest, but the promises of attendance soon turn to excuses and cancellations as the day draws near. That passion and drive I felt attending my first lesson isn’t there. Does this mean it takes a particular type of woman or mind set? I wonder if they would only give it a go they could see the physical and mental benefits this type of training has to offer. It could realistically save a life where else can you get that kind of experience?

Many women sit for hours in a gym in spinning classes, but you can’t spin an attacker though I suppose you could throw the bike at him were it not bolted down. Are women so preoccupied with high energy routines they think will result in a quick weight loss they don’t consider the long term benefits of a martial art or self defence training?

Or is it that they simply want the silver bullet of self defence delivered in a single one hour session (could you make it half an hour) at a convenient time of day, for free, oh and I don’t want to do anything too physical. I’m being sarcastic but it’s how I feel sometimes when faced with this dilemma. So in my quest for some kind of understanding into the minds of women I am going to reach out to a random group of women on the interweb and I’ll get back to you.

Oh and in case you were wondering whether I would have changed anything about the day that brought me to training in the first place, my answer is no, not a thing. I only wish I’d turned up twenty years earlier but at least my father got his wish, he now has three black belts in the family.

Jayne is a director of CRGI, a 3rd dan black belt in Ju Jitsu and a Senior Instructor teaching Ju Jitsu and self defence classes at the Academy of Self Defence.

One thought on “What Do Women Want? – Jayne Wharf”