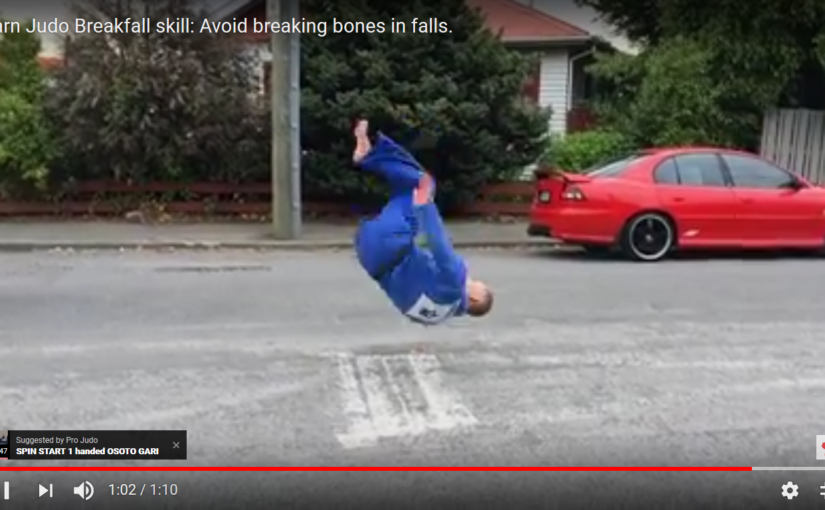 Learning how to safely fall (one interpretation of the Japanese word “ukemi”) — not just on the dojo mat, but on the street, literally on pavement if necessary — is a valuable life skill, not just a martial arts, parkour or free running skill; and it’s more than doing “tricking” or stunts.

This video provides a whimsical yet serious overview of what it takes to undertake this aspect of practical, reality-based training. If you’re new to the concept of controlled falling, especially if you’re considering the value of learning such skills, do NOT watch this video and assume you can safely mimic the techniques: whether on a mat or on concrete, you may and likely will hurt yourself. Find a quality source of training! Several martial arts, such as jujutsu, aikido, judo, hapkido and ninjutsu, heavily emphasize this and other aspects of ukemi. Others, such as certain traditional schools of karate, typically introduce ukemi to seasoned students.

It doesn’t take long for a dedicated student to adequately learn the basic rolls and falls. Some become comfortable in a few days, some as long as a few months. Developing those skills to the point they’re serviceable outside the dojo may take years — and the reality is most students will never feel at ease going airborne and landing on concrete.

The good news is that there are many cases in which injuries were minimized or avoided when martial artists — even novices — utilized ukemi on a street, sidewalk or other unforgiving surface. Keep in mind, however, that most martial arts systems and schools do not require students to demonstrate ukemi proficiency outside of the dojo.

The choice to develop such skills to that level, and bearing the risks of injury in doing so, are largely the burden of each student.