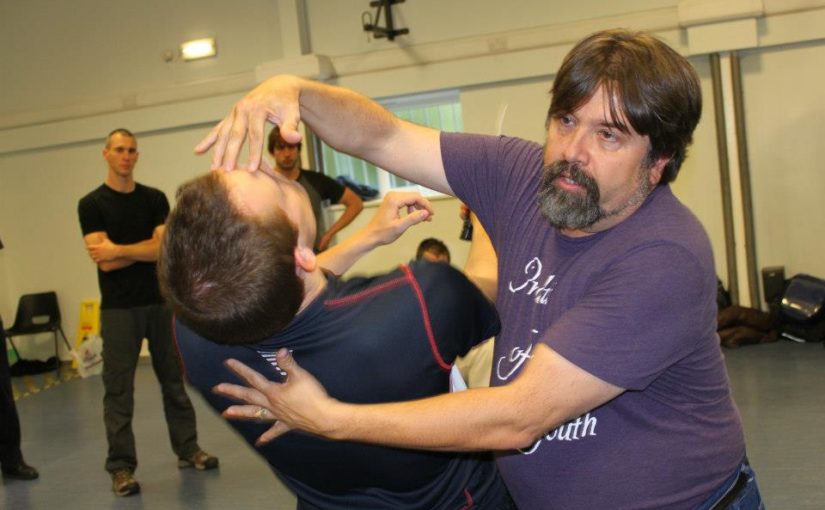 A study at a University of Granada found that when it comes to species who ‘murder’ their own, humans don’t even make the top 50. Meerkats top the list. However, primates DO dominate the killer list’s top 100. So while humans don’t do it as much, killing our own is kind of a family tradition.

Things are far more complicated and involved than “Violence never solved anything” popular among moral narcissists. (I argue that’s an extremist, absolutist and completely unsupportable position and an attempt to keep the adults from talking about the subject).

Let’s take a walk through a few points about violence and killing. Having said that we aren’t very good murderers, humans ARE pack predators.

Also, as a species we’re the most effective predators on this planet. We have literally industrialized our preying on other animals for food.  During a visit to the Spam museum at the Hormel factory (long story) I was told 18,000 pigs a day go in one door and come out another — as little cans of ‘spiced ham.’ This industrialization and sanitation of our killing habits removes the normal, modern person from the realities of our food supply. Ask yourself, “What does this disconnect from having to kill to eat, do to our thinking?”

Seriously it’s a simple question, but it gets real deep real quick. The more you gather information to make an informed answer, the more you realize why there is no simple answer, which is why we need to ask it. (An added benefit is when you hear someone who claims to have ‘THE ANSWER” you recognize the following: If you aren’t confused you don’t understand the problem.) The next step is how does that influence our understanding of violence?

I’m about to give you an important foundation, even though at first it won’t seem relevant. Scientists are studying oxytocin. You know that wonderful chemical inside humans that bonds mothers to their babies, is the biological basis for love and bonding? Yes, oxytocin, the stuff that makes us all warm and fuzzy to our fellows. When we’re dosed, we’re compassionate, concerned and giving, which really, really helps make us ‘better’ people.

It turns out there’s some fine print though. The fluffy stuff from oxytocin is reserved for those we consider our ‘tribe.’ The downside of this exclusivity is it’s perfectly okay for us to … well let’s see, ignore, neglect, screw over, oppress, rip off, abuse, attack and even kill those we deem ‘other.’ All the while priding ourselves for being such good people … because you know, what we do for our family and tribe.

Then you get into Jonathan Haidt’s work on Moral Foundation Theory and how our beliefs, bind us together, blind us and separate us form those ‘evil, rotten, selfish, haters and freakish’ groups. Groups we have deemed different than us.

People we have ‘othered’, you know the people that it’s okay to act against in moral certainty. That may sound like I’m condemning folks, but in fact, I’m not. It’s how we’re wired. A wiring that modern society not only insists we ignore, but pretends doesn’t exist in the push to everyone becoming a giant, kumbaya singing uber-tribe of humanity, a push that people are pushing back against and not even realizing it.

According to anthropologist Robin Dunbar the function numbers of our immediate ‘tribe’ ranges between 100 and 250 relationships. Knowing that, you begin to see where things start getting wobbly. To think of groups of more requires certain mental gymnastics — including identifying ourselves as part of a super tribe, (generally along political, racial, religious and sub-cultural lines). We don’t know them, but we’re a super-group. To be able to identify as a part of this super tribe, you have to adopt said tribe’s ‘thinking’ and standards.  Like all tribal societies, there are established and perpetuated feuds and tensions between your super-tribe and those evil, rat bastards….

All that opens the door to what I want to talk about next, (I told you this subject gets deep.) When we become most dangerous to other humans is when things go tribal — and ‘othering’ occurs.

As an FYI, every time I talk about humans being such lousy killers of fellow humans, someone always asks, ‘What about war?” – or if not brings up genocide. Well, kiddies, here it is. Tribalism, pack predation and ‘othering’, that’s also where you see our tendency for industrialized killing.

But you don’t have to be in a war to encounter ‘othering’, all you have to be is in the wrong part of town and/or a stranger.

The kind of violence you’ll face in these circumstances is different than what happens between members of the same tribe.  This kind of violence escalates faster and has a greater chance of injury. Because you’re an outsider — and especially if the group thinks you’ve done something wrong — they’re often trying to injure you. Maybe even kill you… because you’re not ‘one of them.’  Violence without the intent to injure is usually inside the group disputes or a professional standard (e.g., arrest and restraint).

This dynamic really kicks in when you’re facing multiples.  That’s where the pack predators ‘switch’ get flipped, you too have to mentally shift gears.

However, there’s something that’s just as important. That is being able to explain WHY you knew you were in greater danger facing a group than an individual. See people don’t understand it these days, why? Because they’ve seen too many movies where the hero fights off multiple attackers.