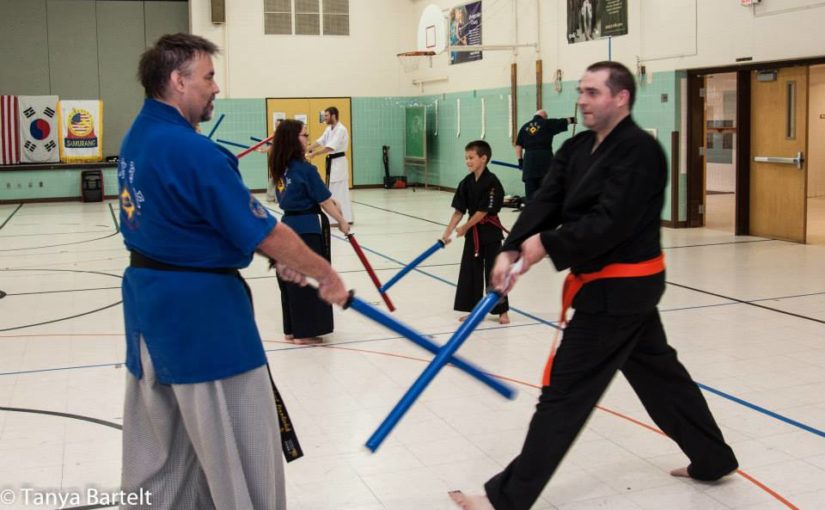 I had a student ask if he could learn the next section of a pattern that he had for his next test. I asked him if his other four patterns were test ready. He replied that they were, so I told him to use them as a warm-up before going further on the current pattern. About half way into the second pattern, he stopped. “I don’t remember what’s next.” was his comment as he walked away. I told him “I guess it needs more work.” If the previous patterns are truly test ready (no pauses, no glitches, no forgetting), then more could be worked on. When he heard that, he chose to get a drink and sit at the table. As this was all prior to class, I left it alone.

Just the other week, I had a student tell me that he doesn’t like when certain students are in class. When I asked why, he responded that they don’t work enough even when told to. When asked how it affected him, which he said it bothers me when they’re standing around. He seems to think that he gets more work done when they aren’t in class. Does that mean he needs people to follow? Maybe his discipline and focus are lacking.

I was watching the forms divisions at a tournament and noticed that many of the competitors appeared to be merely performing the movements in their patterns. Their eyes had no focus, the strikes and kicks moved to places instead of targets, their Kiaps (yells) were timed but without energy and intensity. The precision over intensity and focus that these local athletes have learned shows in international events.

I’m not a competition person, so just performing seems odd to me. I’ve been influenced but the practical side of training that has more focus and intensity. So this isn’t Taekwondo but notice a difference?

The acceptance of rewards for performing has lead to the lack of actually seeking to learn. It is not different from receiving participation medals because you showed up. When more is required than just doing, many lack the discipline and focus to continue. The necessity of working on your own is becoming a lost concept.

There has been a growing trend toward thinking that today’s educational system is based on preparing students to take tests that are irrelevant for their future in any career. The pressure to perform well seems to have driven out the idea of studying for knowledge. The idea of “do it this many times” outweighs the “look inside what you’re doing as you practice”. Once they understand what studying and knowledge can offer them in the way of finding enjoyment and careers, knowing how to study and learn should be able to cross over into many subjects for the same reasons.

This can come down to having a positive purpose. If you are doing something or avoiding something solely for the outcome, then you are missing a great deal! What do you want and why? If the answer is based on an internal purpose, you can have great success. If it based on an external purpose (wanting attention, wanting money, avoiding debt), then you may be missing a good portion of your life. Yes, I very much shake my head when I hear someone say that they don’t care what their job is as long as they can afford to rent a bedroom and aren’t in debt to play video games when they aren’t working. The purpose in life is to play video games? I must be old!