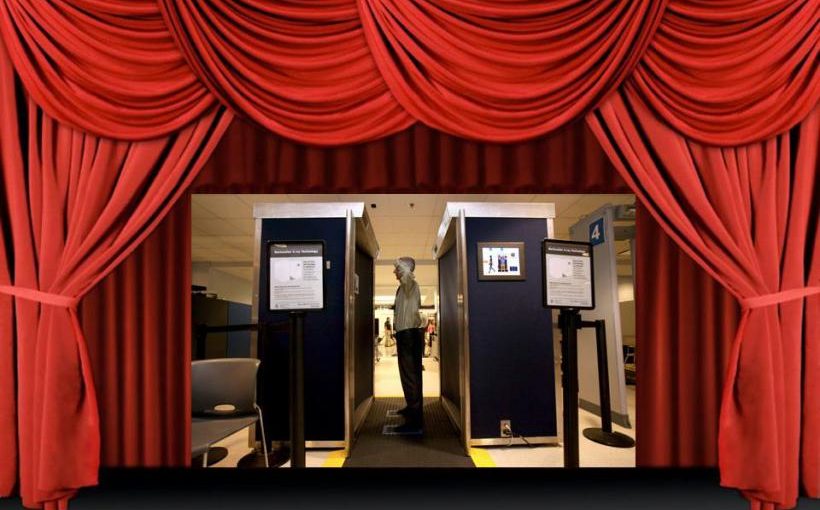 The Transportation Security Administration [TSA], designated cops in schools [aka School Resource Officers or SROs], gun-free zones, random bag checks on subways, and other like-minded safety initiatives have been called security theater by more than a few wise minds.

Computer security maven Bruce Schneier is credited with coining the term security theatre. Mr. Schneier is author of the prescient and illuminating book Beyond Fear: Thinking Sensibly About Security in an Uncertain World.

He offers that the TSA does little to nothing to “keep us safe” and this large outlay of expenditure and labor is there to act as nothing more than a pacifier or Linus’ security blanket for a cowed populace.

Mr. Schneir is not alone in this assessment, Ross Anderson, is a Professor of security engineering, University of Cambridge Computer Laboratory. His research bailiwick is that of the economics and psychology of information security.

Professor Anderson is equally as scathing in the review and record of any of the mentioned displays of security theatre and their purported benefits. [His book Security Engineering is a must-read in the industry.]

Security Theatre is designed [well-intentioned or not] to convey safety/security benefits that dissolve upon close examination.

By this point we are all well aware of the cost-to-benefit absurdity of the TSA’s abysmal record; the TSA’s own internal assessments are less than admirable.

School Resource Officers also come up short, an excellent piece on the perversity of this policy can be found in the Reason magazine article “Why Are Cops Putting Our Kids in Cuffs?” by Robby Soave & Tyler Koteskey [Reason March, 2017.]

Studies of Random Bag Check Policies on Metro Subways in several cities reveal yields of zero arrests despite what many rightly see as infringement of rights. And gun-free zones, well, as we painfully know those who abide by that bit of theatrical law are the very ones we’d prefer to be armed. [At least that’s my preference.]

The purpose for discussing security theatre today is not to provide yet another reason for we the outraged populace to shake our collective fists at our “betters” in bureaucracies but rather to turn the accusatory lens around.

Yes, the aforementioned theatrical productions are unwise, immensely costly [in dollars, time, and in some cases lives] but our outrage seldom does little against our leviathan bureaucratic systems of governance.

Since we can do little to affect security theatre on the macro scale I ask what might we be able to do in the micro, that is at the personal level?

What habits, behaviours, bits of theatrical security showmanship might we be indulging in in our own lives that when we put the cold hard light of pragmatics on it dissolve into TSA uselessness?

Here’s a brief battery of questions to allow you to self-assess.

Do you own a personal protection device?

If so, do you regularly carry it?

Be that device a firearm, a tactical folder, a Taser, hell, it could be a phaser from the future, if it is not carried, that device is no more than a prop in your amateur personal security theatre production.

If you do carry a security tool, have you been trained in its use?

Do you regularly “groove” your training with weekly sessions? [We must always keep the mantra regarding skills in mind “Use it or lose it.”]

Is your device one of actual practical value? This must be asked, as over the years, I have seen many variations of doo-dads that can attach to your keyring or gravitate to the bottom of purses that may be nothing more than teensy theatrical props.

Case in point, the pocket kubatan. I have seen these for years and I ask you honestly how many reports have you encountered echoing these lines?

“I was approached in a parking lot by three shady characters, but fortunately I had my kubaton and lived to tell the tale?”

I’m not picking on the kubaton exclusively, with a little common sense and a little candour evaluate your own tool and ask if it is a benefit or a security prop?

Allow me to ease potentially ruffled feathers by reversing our lens again.

Assuming you think the TSA is an efficient and effective body protecting you from terrorist threat would you approve of a mandate that stripped them of their firearms and instead provided them with kubatons vs. terrorists?

Would you feel safe in a “bad” part of town if you knew that all the cops kept their guns not on their person but somewhere in their glove compartments or at the bottom of their cop purses?

How about if you knew they had never been range qualified for the weapons they carry? Or, if they had been qualified have never bothered to train with the weapon again?

You see what I’m saying, what’s good for the goose is good for the gander. If it is unwise policy and security theatre for those uphill in the hierarchy, I argue that is all the more unwise and dangerous when we look at ourselves as we are inevitably always the first responders in every incident in our own lives.

Let’s turn that lens around upon ourselves once again.

Have you trained in self-defense?

Notice I did not say tae kwon do, Brazilian jiu-jitsu, boxing, or any other combat sport. As formidable, fun, and worthy of merit they all may be in their own arenas, a mere 15 minutes out of your life viewing actual assaults on YouTube will reveal that violent reality seldom resembles a sportive construct.

So, again, have you trained in self-defense?

If so, do you regularly touch-up your skills?

If not, that krav maga class from a few years back or that half-hearted touch-up of skills occasionally is akin to the weapon seldom if ever fired.

Self-defense that does not reflect real-world realties is akin to mime in our security theatre presentation, that is, an art form best performed by oneself for oneself as no one really needs it. [Apologies to mimes everywhere, in truth, I find Chaplin a genius.]

To carry on our theatrical criticism, much lip service is paid to awareness, alertness, mind-setting, and like “eyes of a warrior” mentalities. And yet, I know many [many, too many] folks who preach that message who conduct their lives with heads-down and phones out—this is particularly conspicuous at airports and all large public gatherings where one would assume that this touted “warrior alertness” is most in need.

To give voice to awareness and mind-setting talk is, again, security theatre, the mere uttering of lines in a play. We say the words we think that a high-speed/low-drag seasoned Navy SEAL would utter, but if we aren’t stepping up to the words we are simply playing a role and we may be fooling no one but ourselves.

So, again, I ask you what’s your own bit of security theatre and what can you do to take it from the playhouse to the streets.