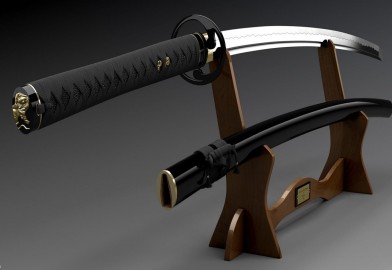 The etiquette for handling, and passing off a firearm is very similar to that of handling and passing off a sword. The customs are put in place to ensure no one ever becomes complacent with the weapons of their trade. To show that you can be trusted in the field, and to show loyalty and respect. The more violent the culture, the more important it is to be polite. If a violation of conduct either actual or only perceived can have severe repercussions up to and including death, then strict rules of etiquette are needed.

Regardless of time, culture, or region the etiquette of warrior cultures shared a common core. They may have had differing rules, but the rules themselves served a common purpose. Safety, Trust, and Respect. Safe handling / presentation of a weapon shows you can be trusted and shows respect for your peers and your superiors. Being disrespectful / untrustworthy is hazardous to your safety.

Rules and customs are put in place to ensure safety and to demonstrate respect, both for the weapon and the peers you would fight with.

Safety
Those that use weapons, who are surrounded by them on a regular basis, are more likely to become complacent around weapons.

If you have a weapon on you all the time it becomes common place. This has pros and cons. You become used to it, it isn’t weird any more. You actually feel weird without a weapon. Your spouse doesn’t bug you about it anymore. You don’t have to argue about why you need a weapon every time you leave the house. It becomes no big deal. However because it is no big deal you run the risk of forgetting the weapon always presents potential lethality. When you are complacent with weapons bad things happen.

Complacency can have fatal consequences. As a reminder of this many fire arms training days for the SWAT team started with a power point presentation of Law Enforcement Officers that were killed with a firearm in training the previous few years. Either at their own hands, or by another Officer. The list grew every year. Rules are put in place to prevent, and mitigate complacency. These rules become customs.

You can find these ideas with any weapons, but let’s look at the rules for handling modern firearms and how that compares to etiquette handling a Japanese sword. Different cultures, but the same job, using the same ideas. All weapons are treated as if they are live. In the case of the sword, bokken (wooden training sword) and shinken (live sword) are treated the same. (I’m just going to use common language if you want to know specific Japanese terms there are plenty of sources available). The tip and the edge are always kept away from your peers. When kneeling the sword is placed on your left side slightly behind your knee, point back, edge towards you. (All the dangerous parts pointed in a safe direction). When you bow in, your left hand (non dominant – there were no left handed Samurai*) is used to place the sword in front of you. Edge pointed towards you. (Showing you are not a threat)

*in a homogeneous society like Japan natural left hand students were conditioned to be right handed. This doesn’t mean that they didn’t also use their left or become ambidextrous.

Different rules for different weapons but the ideas are the same. Point the dangerous parts somewhere safe. Show you are not a threat.

Clearly there is a reason for all of this. If a shot is fired intentionally or otherwise you want the bullet to go down range. Where it is built to take bullets, not into a wall, floor, or ceiling, and sure as hell not into yourself or a fellow Officer. If you stumble with a sword you want the worst thing to happen to be embarrassment. You don’t want to be maimed or worse hurt your peers.

Lasering is a term that refers to where your muzzle is pointing. As if a laser is attached to it. Lasering your buddy is when you cross him / her with your muzzle. It is a good way to kill your partner.

So, rules are put in place to prevent, and mitigate complacency. When you must cross your partner’s path, you Sul your weapon. Sul generally means you place the muzzle down, the weapon is pressed tight into your chest. Sul is Portuguese for south, the phrase is a remnant of U.S. Special Forces training South Americans. Other agencies / teams practice pointing the muzzle up, like an 80’s detective drama on TV because it fits better with their tactics. They may have differing rules, but the rules themselves serve a common purpose. Don’t point your gun at your buddy. Don’t present as a threat to your peers.

With a sword, at times training will be interrupted for your partner to receive instruction. Like the Sul with a fire arm there are acceptable positions to show safety, and that you are not a threat. They include turning your hands over so that your right hand is crossed over your left, and near your left hip. Tip back edge down. Or in your right hand edge up (backwards) tip to the front, but pointed away from your partner and the Instructor.

Rules become customs
Your primitive lizard brain understands rhythm and ritual. Doing this has not gotten me killed. It is a proven survival tactic. I must continue doing this. Rules become customs. Customs become ingrained neurological patterns. Safety and respect become hard wired. Sound like bull shit? Don’t believe me? Any one reading this that has trained in a Japanese martial art where you bow off and on the mat, and bow to your partner to begin training with them knows better. They have undoubtedly bowed into or out of a room outside of the Dojo for no reason, say when entering their bedroom. Or have bowed to someone outside the Dojo, seemingly for no reason.

Customs become ingrained neurological patterns. So it makes sense to have customs that ingrain safe handling of weapons. Violation of custom has severe repercussions. Up to and including death. In all warrior cultures, especially after the rules have been taught, mishandling a weapon is going to get your ass kicked. Anyone reading this ever hand a loaded weapon to a superior? Or lean on a training sword like it was a cane? If so, I’m sure at the very least you got an ass chewing in front of everyone else. Educational beat down for you, and using you to educate everyone else that this behavior is unacceptable. Maybe it was physical punishment, drop and give me 50 pushups. Or social pressure, everyone else drop and give me 50 pushups while dip shit here counts them off for you. Be sure to thank him for this when you are done. Maybe you got smacked in the head? If the infraction was severe enough you may have even been removed from the organization.

So you have to earn that trust back. You have to pay a price. Kiss kiss bang bang. You get knocked down a peg, but you make up, you are allowed to continue to be part of that “tribe”.

The second, this one is older and I feel more deeply seated. If you violate the custom and you are not learning from the repercussions, that only leaves a few options. You are too god damned dumb to be part of this organization, you have no respect for the organization, or you are betraying this organization. Look at the customs. I am close to you with a lethal weapon. I show not only safety, but loyalty by handling that weapon in such a way that I couldn’t possibly hurt you with it.

I feel this is older because spies and assassins infiltrating the organization is not something I have ever had to deal with. Seems like a remnant of the past. But there are plenty of incidents recently in the middle east of enemy combatants disguised as local police or coalition forces. I also feel this is older because the reaction to betrayal has always been a higher level of violence. Every culture still has a death penalty for treason.

Some of the best knife defense training I have ever received is following a simple set of rules. (If you have ever trained with Marc MacYoung these should be familiar).

The more violent the culture, the more important it is to be polite.
Being polite isn’t weak, in warrior cultures it serves a common purpose.
Regardless of time, culture, or region it shows you understand the weapons of the trade. That you can be trusted in the field, and demonstrates loyalty and respect to your crew.

Keckeisen holds 6th degree black belts in Judo, Jujitsu, and Aikido and a black belt in Taiho Jutsu Keckeisen is also recognized as a Shihan by the International Shin Budo Association. He is also a catch wrestling and bareknuckle boxing enthusiast, and a terrific dancer.

Keckeisen, along with Marc MacYoung and Rory Miller is a founding member of Violence Dynamics

Keckeisen runs Judo Minnesota, an organization that provides free training to Law Enforcement and Military, and provides opportunities for youth to have positive experiences with Law Enforcement through martial arts training.