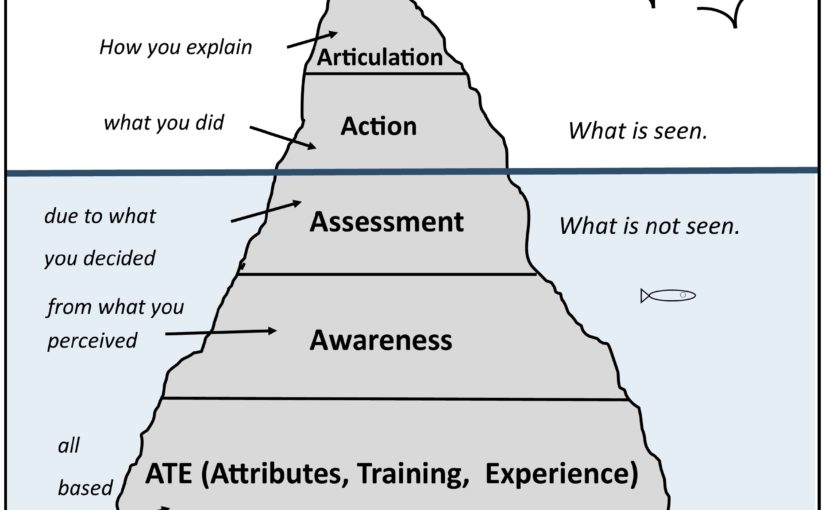 The idea is that your skillful accomplishment of a task is the result of five interdependent steps. Each successive step is based on the previous ones. The foundation of these steps to accomplish a task begins with your natural attributes, your formalized training and education, and your life experience.

In terms of the Iceberg diagram above, when we observe other people accomplish a task, we see what they have done. We see how they explain what they have done. But what we don’t see is how they decided to do what they did. How their perceptions influenced their decision. And how their individual attributes, training, and experience affected all of it.

Given that no two people begin with the same ATE. It is unreasonable to expect that those two people would accomplish a given task in the same manner. Yes, you can theoretically provide two people with the very same training and education. But their individual natural attributes and life experience will differ. Therefore, their results will differ.

If you are teaching a class of twenty people to respond (accomplish a task) to a certain stimulous (a punch for example), you should expect twenty varied responses. If some of them respond in a manner vastly different from what you would do, then mostly likely, they have a vastly different ATE than you.

When an instructor’s ATE is very different from his students’ ATE, his “qualifications” may actually interfere with his ability to teach his students effectively. Unless, the Instructor consciously takes into account how his own ATE differs from his students. But to do so means being aware of how an individual’s ATE influences his or her accomplishment of any given task.

Take basic juggling for example. Once you are able to successfully juggle three balls, it is a relatively simple task. You are just throwing balls into the air, catching, and throwing again in a certain order. It doesn’t take great hand-eye coordination to accomplish. But it looks impressive. After you have been juggling for a while, it is easy to forget how difficult it was for you to learn. You can demonstrate juggling with ease.

What you have forgotten is that the Now-You is different from the Before-You who didn’t know how to juggle. The Now-You has a different ATE then the Before-You. Your Attributes may be the same. But your Training and life Experience has changed. Your brain wiring has been modified. You can never go back to what you were before your learned how to juggle.

Let’s say students come to your class saying they want to learn how to juggle. Yet they are only willing to devote a few hours to your class and will not practice afterwards. Can you really teach them to successfully juggle? There are always those few people whose extraordinary natural Attributes allow them to skillfully accomplish a new task quickly, but the majority cannot.  In this example, you must realize that unless the students have prior juggling training or life experience, they will not learn to juggle three balls. But they could learn to juggle two balls (which is not really juggling).

So what do you do? Try to teach them to juggle three balls which is more fun for you and allows you to demonstrate your skill, but knowing the majority will fail. Or teach them elementary two ball throwing which is unexciting, but something that all your students can realistically accomplish given their limitations?

Or do you tell them that their stated goal of learning to juggle is unrealistic? That they need to reconsider their commitment to learning to juggle. That they can learn to juggle, but it will require more time and effort on their part. All of which they will not want to hear and will most likely make you unpopular. Or do you just take their money and pretend that they will actually learn how to juggle due to your specialized teaching methods?

The Importance of Feedback

Your ATE is not static. It is only fixed in any given moment in time. It is always subject to change and evolvement. But if you are unwilling to train yourself and you limit your life experiences, then your ATE will remain in a narrow change. Your ATE is analogous to a Closed Belief System. People with a Closed Belief System are not open to new information. Their Belief System does not evolve. It is effectively static over time.

On the other hand, people with an Open Belief System are constantly evolving their beliefs in response to new information. And so it is with your ATE. You ATE will grow and evolve overtime if you allow it too. And you can actively evolve it by seeking out new training and new experiences.

What causes an ATE to change is a willingness to respond to Feedback.

Having static ATE is like being a computer running a fixed program. The computer responds in the same manner to identical input. It disregards feedback.  Computers with artificial intelligence on the other hand modify their programing in response to feedback. Their programming evolves.

But the quality of a person’s learning is limited to the quality of the feedback received. You can’t develop a high level skill without realistic feedback. This applies to both physical and mental skills. You need to know what you are doing correctly so you can keep doing it. And know what you are doing incorrectly, so you can stop/limit doing it. The more complex the skill, the more feedback is required.

Think of these main concepts in terms of self-defense instruction. The accomplished student is able to Articulate why he or she Acted in a certain manner, based on what he Assessed, based on what he was Aware of, in response to a particular threat, with all steps taking into consideration his individual ATE.

If you can’t provide your students with realistic feedback, then they can’t really accomplish skill. But, they can develop the belief that they can accomplish a skill.